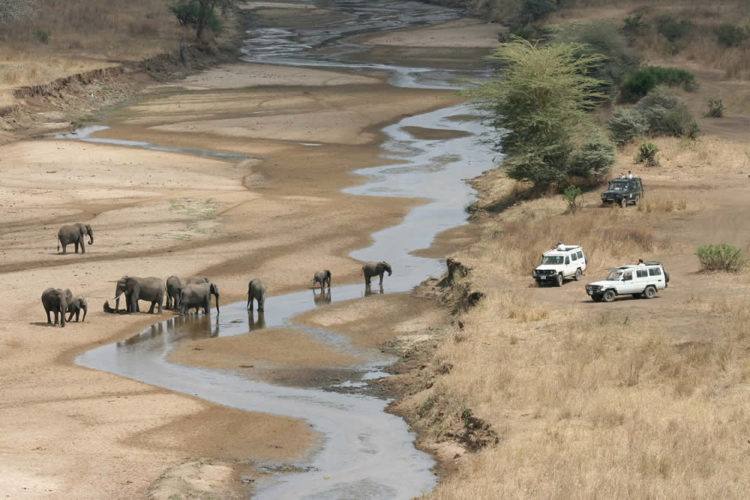 You’ll stay in remote and beautiful safari accommodation including the classic Old Farm House at Kisolanza, the strategically place Ruaha River Lodge where you can view game in the lodge grounds and at Vuma Hills Tented Camp where you can experience life under canvas while sleeping in a comfortable bed. The wildlife and birds are prolific at Ruaha and the landscape is spectacular at Mikumi so prepare to be wowed and have your camera or binoculars at the ready at all times.

Highlights of the tour include visiting:

Upon arrival into Julius Nyerere International Airport in Dar es Salaam, you will be met by your Daigle Tours guide and transferred to the hotel where you can relax and recover from your journey.
Accommodation: Tanzanite Executive Suites.
Meals: Breakfast and Dinner.

After breakfast, you will start your journey by leaving for Mikumi National Park which is 4-5  hours from Dar es Salaam. Mikumi National Park is nestled between the Uluguru Mountains to the northeast, and the Rubeho Mountains, Udzungwa Mountains and Rift Valley escarpment to the southwest. As part of the Selous ecosystem, it benefits from the highest game density of the entire conservation area. The landscape here is beautiful and the wildlife prolific. You can expect to see animals like elephant, giraffe, zebra, eland, kudu, wildebeest, antelope, tree-climbing lion, leopard, wild dog,  jackal and an amazing array of colorful birds.
Accommodation: Vuma Hills Tented Camp.
Meals: Breakfast, boxed lunch and dinner.

Full day of game drives around Mikumi National Park which has a wide variety of bird species, large numbers of giraffe, buffalo and elephant and, near the water holes, lion, leopard and hippo. You may also see zebra, lion, wild dog, python, hartebeest, wildebeest, elephant, impala, warthog, eland and other antelopes. Several observation towers enable you to view the park in its entirety. Mikumi National Park is mostly Miombo woodland with its gently rolling hills. You can also go on a walking safari with your guide and an armed ranger to get up close and personal with the flora and fauna.
Accommodation: Vuma Hills Tented Camp.
Meals: Breakfast, lunch box and dinner.

After breakfast, depart for Ruaha National Park which is a 7-8 hour drive via Mikumi and Iringa. In the afternoon we will arrive at Ruaha River Lodge constructed on and around a rocky kopje overlooking the Great Ruaha River. The Lodge provides comfortable accommodation and good food while blending into its surroundings, enabling visitors to feel part of the wilderness. Both the dining “Banda” and the bar, elevated above the river, combine comfort and coolness with spectacular views and game is often seen right in the lodge grounds.
Accommodation: Ruaha River Lodge.
Meals: Breakfast, lunch box and dinner.

Two full day game drives at Ruaha National Park with a picnic lunch. Ruaha, with an area of 10,300km², is the second largest park and second largest elephant sanctuary in Tanzania. The Great Ruaha River that flows along its entire eastern border, creating spectacular gorges and scenery, features a large number of hippos and crocodiles. The wide variety of animals include greater and lesser kudu, roan and sable antelope. Bird life is rich, with over 370 species recorded.
Accommodation: Ruaha River Lodge.
Meals: Breakfast, lunch box and dinner.

After a morning game drive, you will depart for Iringa. En route, you will visit the Museum of Kalenga, the former headquarters of the Wahehe and home of the chief Mkwawa who led a fierce opposition against the German occupation of Tanzania during colonial times. At Isimilia Stone Age Site, you will see stone-age tools and wander through an amazing canyon with picturesque limestone pillars. You’ll get to The Old Farm House at Kisolanza on the outskirts of Iringa in time for dinner.
Accommodation: Kisolenza Farmhouse.
Meals: Breakfast, lunch box and dinner.

After breakfast, you will be driven back to Dar es Salaam, arriving at your chosen destination in the late afternoon. You can choose to go to a hotel in Dar, back to the airport for your flight home or to catch the last flight to Zanzibar if you extend your trip. Either way it’s been an amazing safari and you’ll have some incredible photos and stories to share with your friends and family back home.
Meals: Breakfast. 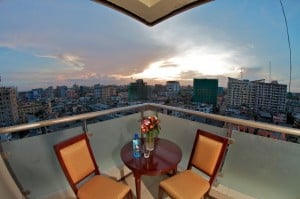 Tanzanite Executive Suites are 15 minutes from the Airport. There’s a gym, sauna and jacuzzi where you can relax and recover from your journey. There is WiFi throughout the hotel and various suite sizes available to suit your travel party. 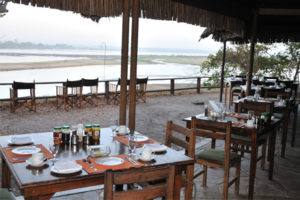 Nestled in the forests of the Vuma Mountains that overlook the Mkata Plains of the Mikumi below, Vuma is a cool retreat from the heat after a day’s game drive. Your spacious and comfortable tent will have a colonial décor.  The cosy bar area has a roaring log fire and opens onto a large deck where you can watch the sun set over the Mkata plains below. Under the same thatch, the dining area has wide views across the swimming pool and the lush trees.

Sleeping under canvas at Vuma Hills is a far cry from the discomfort usually associated with camping. Complete with shaded wooden veranda at the front and en suite bathroom facilities at the back all your comforts are provided for. Vuma Hills Tented Camp is the quintessential safari camp. 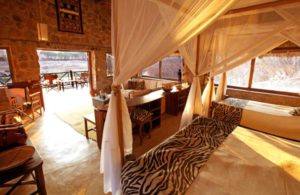 Perfectly situated on one of the most stunning stretches of the Great Ruaha River you can see game throughout the day from the comfort of your veranda when you stay at Ruaha River Lodge. Built out of local stone and thatch, the lodge is built around natural kopjes and capitalises on it’s exceptional position on a bend in the river.

Ruaha River lodge is the only lodge in the Ruaha consisting of 24 stone chalets stretching along the river bank. Each chalet has stunning views from a large veranda out the front, while the huge interiors feature a sitting area, writing desk and either twin or double beds. At the rear of each chalet is a large bathroom decorated with found timber, a shower and double basins. There are two dining areas one of which is imperiously-positioned atop the largest kopje in the area with commanding views down two sections of the river. This is surely the best sundowner spot in Ruaha.

The Old Farm House, Kisolanza is a guest house, campsite and working farm centrally located in the heart of the Southern Highlands of Tanzania. The Old Farm House is conveniently situated between Mbeya and Dar es Salaam making it an ideal ideal stopover spot for travelers. Set in the crisp, cool altitude of Tanzania’s scenic Southern Highlands, Kisolanza has been the home of the Ghaui family since the 1930’s. The Old Farm House has grown to include a whole range of accommodation from luxurious cottages to bush camping, plus an exceptional restaurant and bar, a farm shop, and a spa. Guests can enjoy all the creature comforts a guest could desire including hot showers, delicious food, a warm clean bed.

Package is inclusive of:

Package is exclusive of: –

To find out more or make a booking please contact us or use our booking form. If you’re dreaming of a Tanzanian safari we’ll make it happen.

The tour itself was great. Our guide, Hassan, was very knowledgable and helpful. Everyone had a great experience. The only complaint and this was not their fault, was the brutal traffic coming back. Be sure you are prepared for literally hours of traffic jam. Also, apparently some of the roads have changed since they put up their website so you should add an hour driving time to the day tours.
Overall I would highly recommend them, and Hassan specifically.

Great safari! Our guide and Samwel came to pick up and welcome us at the port station. They were very friendly and we fastly felt comfortable!
They do the best to adapt the plan to our needs.