Tarangire National Park and the Tarangire River flow with water and wildlife. Even in the dry season when the sun sucks the moisture from the earth and the grass is withered and brittle, there is always water in the river. It may be shriveled to a thin shadow of its wet season self, but it is still choked with thirsty traveling animals that have wandered hundreds of kilometers to drink. 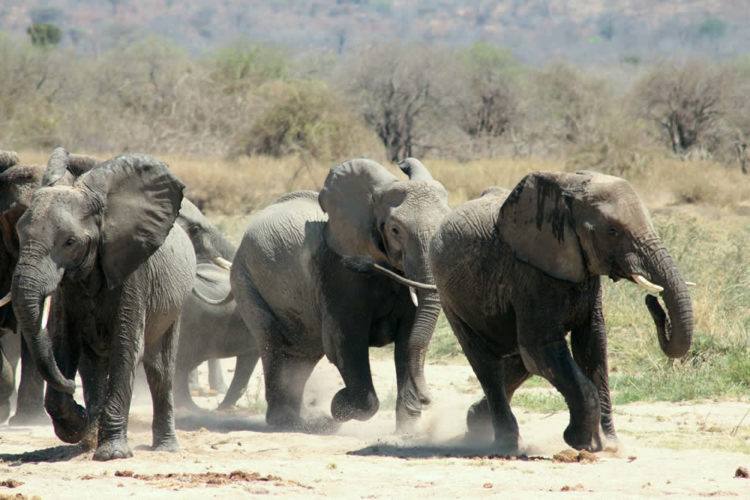 In Tarangire National Park massive herds of elephants paw at the dry riverbed, searching for the water that has sunk into the ground. Migratory wildebeest, zebra, buffalo, impala, gazelle, hartebeest and eland crowd around shrinking lagoons. Predators strike from the fringes of the great herds and take down their prey.

The park has the largest concentration of wildlife outside of the Serengeti, and it is the only place in Tanzania where dry-country antelope such as the oryx and gerenuk are regularly observed. The seasonal visitors to the river scatter during the rainy season, spreading out over a 20,000 sq km (12,500 sq miles) of green plains. When the grasses shrivel, they return to the river.  Mobs of elephants, however, can be seen year-round, and the perpetually emerald swamps contain 550 bird species making it home to the most breeding species in one habitat anywhere in the world.

The swamps are not the only places to find a myriad of bird species. The drier areas of the park showcase the kori bustard, the heaviest flying bird. The world’s largest bird, the stocking-tithed ostrich, can also be found here along with small groups of blustering hornbills.  Ardent bird-lovers should keep their eyes peeled for the screeching flocks of the yellow-collared lovebird. This colorful bird is contrasted by the drabber rufous-tailed weaver and ashy starling.  Colonies of the dwarf mongoose and pairs of the red and yellow barbet frequently make their homes around disused termite mounds that rise above the grasses. The park’s trees often host pythons as well as lions and leopards. These animals lounge in the shady branches. The only hint that they are watching is the subtle twitch of a tail.

About Tarangire National Park
Size: 2850 sq km (1,096 sq miles).
Location: 118 km (75 miles) southwest of Arusha. It’s an easy drive from Arusha or Lake Manyara following a surfaced road to within 7km (four miles) of the main entrance gate. You can also continue on to Ngorongoro Crater and the Serengeti. Charter flights are available from Arusha and the Serengeti. Guided walking safaris.

Day trips to Maasai and Barabaig villages, as well as to the hundreds of ancient rock paintings in the vicinity of Kolo on the Dodoma Road. Tarangire National Park is a great place to visit at any time of the year, but the sheer number of animals makes the dry season (June-September) the most impressive. There are two lodges, one tented lodge, and two luxury tented camps inside the park, another half-dozen exclusive lodges and tented camps immediately outside its borders. Several campsites are situated in and around Tarangire National Park.