To see the annual great migration of millions of zebra and wildebeest unfold, head to Tanzania’s northern parks – the Serengeti and Ngorongoro Conservation Areas. It’s easy to plan your wildlife viewing in that area

Tanzania’s Great Migration is an impressive phenomenon determined by the availability of grazing, which in turn is dependent upon rainfall. Essentially the migrating wildebeest are taking advantage of the strongly seasonal conditions, spending the wet season on the plains in the south-east, and the dry season in the woodlands of the north-west. However, the sheer weight of their numbers also plays an important role in shaping the environment to their needs. 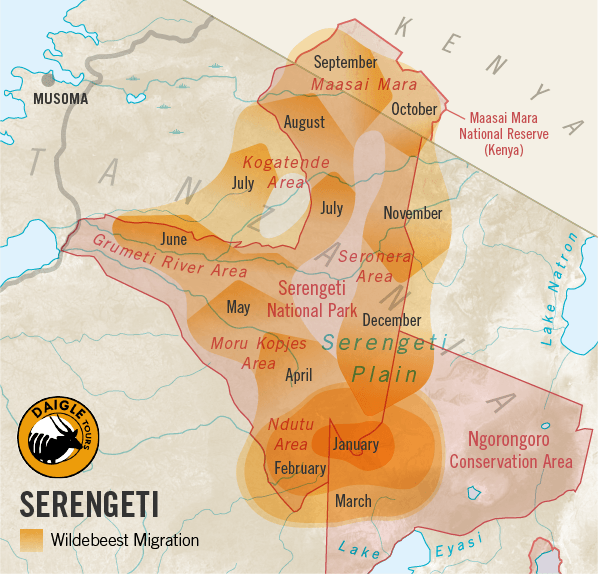 Members of the vast wildebeest herd give birth more or less simultaneously, usually over a period of three weeks sometime between January and March, when optimum grazing is available on the short grass plains at the base of the Gol Mountains.

The Great Migration is rarely the same in terms of precise timing and direction, as local conditions influence grass growth. This means that the wildebeest may move off the open plains earlier in some years and remain in the northern woodlands for longer in others.

The timing of the wildebeest calving is probably linked to the timing of the rut at the end of the rains in May and June. The wildebeest move off the plains at this time to a smaller area which is necessary to synchronize the rut. Interestingly, the rut itself appears to coincide with the full moon suggesting that the mating peak is triggered by the lunar cycle.

Typically, the wildebeest migration heads north-west from the short grass plains to the Western Corridor of the Serengeti and its Grumeti River. This watercourse is their first real obstacle and gigantic crocodiles are waiting for the hesitant wildebeest to stumble at the crossing. From Grumeti, the herds move north, often spilling over into the Klein’s Camp Concession, before crossing the Kenyan border into the Masai Mara. Here again, they must cross a river, this time the Mara with its flotillas of hungry crocodiles. The mass of grunting wildebeest remain on the productive Mara grasslands until October or November. Then, as the storm clouds gather in the south, the vast herds return to their breeding grounds which, by the time they arrive, are once again green and lush. So the migration cycle begins again.

Want to find out more about great migration safaris with Daigle Tours? For information about safari packages or to plan your bespoke safari download our brochure here or contact us now.
Book Your Trip