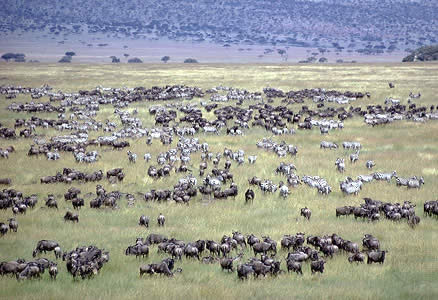 Serengeti National Park is the oldest and most popular park in Tanzania. This huge tract of land offers the most spectacular views of wildlife in all of Africa. It is a magnificent vista, breathtaking in its feral beauty. It is the crown jewel of the Tanzanian Northern Circuit.

The Serengeti is most well known for the Great Migration that takes place every year. For three weeks, the inescapable circle of life drives one million wildebeest to cross the plains in a frenzy of mating and territorial conquest. This one thousand mile long pilgrimage shakes the plains as hooves crush the verdant grasses.

Wildebeest are not the only animals to take part in the migration. Nearly 200,000 zebra and 300,000 Thomson’s gazelle join the migration each year. There is protection in numbers as the massive herd braves the crossing of crocodile-infested waters.

The gathering of so many animals draws an astounding number of predators. Prides of lions stalk the herds of grazers that roam through the grasses. Solitary leopards haunt the branches of acacia trees, lounging in the shade until the moment they choose to strike. Cheetahs prowl in stately grace until they explode into action to take down their prey. The circle of life is vibrant and easy to view upon the Serengeti. 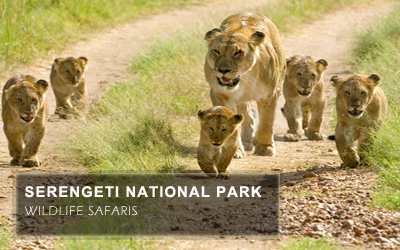 Though the immense number of animals is the main draw of the Serengeti, there are many other breathtaking sights. The landscape is incredible. The burnt savannah stretches unbroken to the shimmering horizon where the sun sinks into the earth. The seasonal rains turn this golden expanse into a lush, green sea peppered with the bright spots of wildflowers. Winding rivers meander across the plains, and massive termite mounds rise from the seemingly unending grass.

The sheer size of the Serengeti makes it nearly impossible to see other tourists or safaris upon its expanse. Watch the Great Migration in near solitude and feel like the only person witnessing this incredible spectacle. Serengeti National Park is an amazing place just waiting to be explored.