Archaeological and documentary research has revealed that 11th centuries, Kilwa grew to be a substantial city and the leading commercial entrepot on the southern half of the Swahili coast (roughly from the present Tanzanian-Kenya border southward to the mouth of the Zambezi River), trading extensively with states of the African hinterland and interior as far as Zimbabwe. Trade was mainly in gold, iron, ivory, and other animal products of the African interior for beads, textiles, jewelry, porcelain, and spices from Asia. 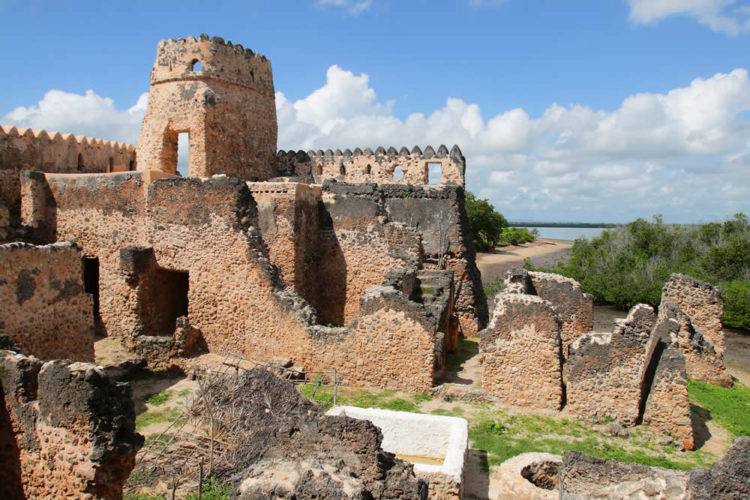 More about Kilwa Heritage Site
The town Kilwa as such is divided into three different towns: Kilwa Kivinje, Kilwa Masoko and Kilwa Kisiwani with Songo Mnara and Sanje Ya Kiti. Kilwa Masoko is however the least interesting history wise, but the modern town right now, and centre of operations as well as location of all modern day facilities. In the early 16th century, Vasco da Gama extorted tribute from the wealthy Islamic state, but not soon after, another Portuguese force commanded by D. Francisco de Almeida took control of the island in (1505) after besieging it. It remained in Portuguese hands until 1512, when an Arab mercenary captured Kilwa and expelled the Portuguese. The city regained some of its earlier prosperity, but in 1784 it came under the rule of the Omani rulers of Zanzibar. After the Omani conquest, the French built and manned a fort at the northern tip of the island, but the city itself was abandoned in the 1840s. It was later part of the colony of German East Africa from 1886 to 1918.

Kilwa Kivinje was in the 19th Century an Arabian slave and ivory trading town, where caravans started off into the interior. With the end of the Arab time at the end of the 19th century, the German colonial government built a fort and extended the town. From German times one can still find a Market Hall, the big Fort with a canon from the 1st World war, and two pillars one for the tribal dead of the Maji Maji War fought between the local tribes of Southern Tanzania and the German Colonial government and the other for two German traders also killed during the same Maji Maji War.

Kilwa Kisiwani is where one will find the greatest collection of ruins: The Big Mosque is from the 12th Century and was further extended up to the 15th Century. On the Northern shore one will find the old Omani Fort, which is built on the foundations of the old Portuguese fort, in the early 19th Century, and where still an old wooden door remains. It was said to be the largest mosque in East Africa. The Great House directly south of the mosque was once a complex building which was most likely the Sultan´s palace. In it there are four graves, of which one is rumored to be of a Sultan. The small mosque from the 15th Century is the best kept building on the island and still in use today. The large complex of walls in the west of the island is called “Makutani” (in the great wall). In the middle is a palace from the 18th Century, south of it, another Sultanas palace, with a mosque from the 15th Century.  All the way to the east of the island there are the ground walls of the ”Husuni Kubwa”, once the largest building in tropical Africa.

Songo Mnara, another island with 14th to 15th Century houses and mosques. Some of which still show high walls and even parts of their roofs