The game is bountiful in Ruaha National Park, and the animals are visible from the moment the plane touches down. The runway is bordered by grazing herds of giraffe and zebra. Watch in mesmerized awe as they are startled by the engines of the airplane and race across the airstrip to escape. 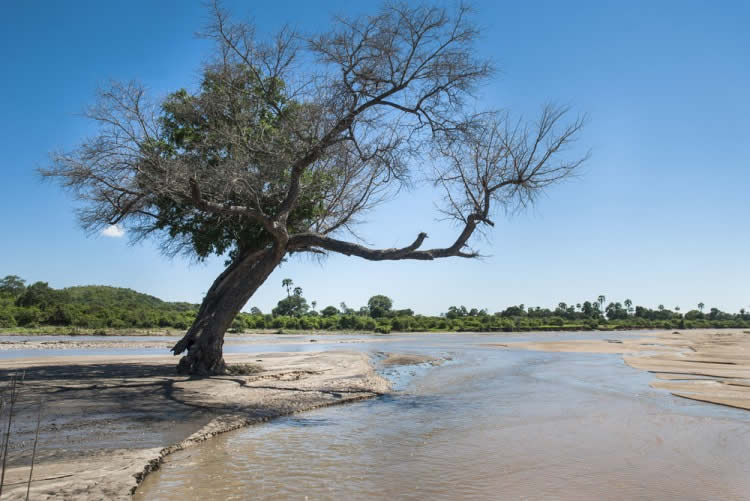 The Ruaha National Park protects a vast amount of the rugged, semi-arid brush country characteristic of central Tanzania. The unbroken wilderness is unsurpassed by any place in the country except for Katavi. The park is also home to the largest population of elephants in any East African natural reserve. The 10,000 specimens can be seen scattered beneath the baobab trees, huddled protectively around their young.The lifeblood of the park is the Great Ruaha River. It courses along the eastern border of the park, a raging torrent at the height of the rains that dwindles to a scattering of precious jewel-like pools when the rains subside. During this time of drought, impala, antelope, and waterbuck risk their lives to take a sip of the life-giving water. A network of game-viewing roads follows the river and its tributaries. Here you will see numerous animals come to drink from the river despite the risk of death. The animals coming to the river to drink attract numerous predators. Large prides of lion stalk the savannah. Cheetahs slink through the grasses, and leopards lurk in tangles thickets along the riverbanks.

The unusually high diversity of antelope is another reason that an impressive array of predators is attracted to the park. Striped and spotted hyenas can be found, and several conspicuous packs of the highly endangered African wild dog also call the park home.

Ruaha National Park features the largest population of greater kudu in East Africa. These animals are the park’s emblem and are characterized by the male’s magnificent corkscrew horns.  Mammals are not the only incredible creatures to be found within the park. Nearly 450 species of bird can also be seen flying over the savannah. The persistent trilling of the crested barbet is a characteristic sound of the southern bush. The yellow-collared lovebird and ashy starlet are also commonly seen.

Getting there
Scheduled and/or charter flights from Dar es Salaam, Selous, Serengeti, Arusha, Iringa and Mbeya are available.

Year-round road access passes through Iringa from Dar es Salaam (about 10 hours) via Mikumi or from Arusha via Dodoma.

What to do
Day walks or hiking safaris through untouched bush provide a magnificent view of the native wildlife.

Stone age ruins at Isimila, near Iringa, 120 km (75 miles) away are one of Africa’s most important historical sites .

Best time to visit
To see predators and large mammals visit during the dry season (mid-May through December) Bird watching, lush scenery and wildflowers are best viewed during the wet season (January through April) The male greater kudu is most visible during the breeding season in June.